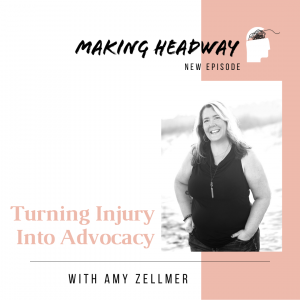 Editor-in-chief of the Brain Health Magazine, Amy Zellmer, is no stranger to podcasts — she reached recently her 200th episode of her podcast “Faces of TBI”.

Earlier in March, she appeared on an episode of the Making Headway Podcast, hosted by Mariah Morgan and Eryn Martin to talk about her brain injury experience and the path it led her on towards recovery and advocacy.

Amy received her TBI from a fall when she slipped on black ice on her driveway. She immediately knew something was wrong due to her throbbing head and blurry vision. She began suffering from vision problems like nystagmus and focusing issues, as well as other ailments including memory issues and fatigue. She started visiting doctors, neurologists, and chiropractors, each one diagnosing different problems, but none offering long-term solutions.

Chiropractic care helped realign her sternum and alleviated physical pain, and yoga improved her balance. But it wasn’t until two and a half years after her initial incident that she discovered functional neurology and began making steps towards recovery.

During this time, Amy wrote an article describing her struggles with her TBI, specifically the troubles she had getting her friends to understand what she was going through. “Tons of friends drifted away… it really, really hurt. They had been there for me when I had a cold, for these inconsequential sicknesses”. This article, featured on the Huffington Post, acted as a springboard for advocacy for Zellmer.

Since then, Amy got involved with several brain injury organizations and started attending Brain Injury Awareness Day. She also created the Brain Health Magazine, the Faces of TBI Podcast, and the Concussions Discussions video series. “Everybody has a different way of comprehending after brain injuries… so I really tried to target the different ways of inputting information.”

These various platforms are to help raise awareness about the TBI community. Mariah Morgan reflected during the interview that TBIs can come across as invisible. Even functional neurology seems rather unknown compared to normal neurology, which tends to focus on neurological diseases rather than brain injuries.

While Zellmer does encourage others to serve as an advocate for TBIs, she urges people to stay aware of their own limitations. “You know your body best,” says Zellmer, and advises against comparing recovery times to other people. “Some people might take a lot longer to get there… no two injuries are the same, no two recoveries are the same.”

A good place to start getting involved as an advocate is with nonprofits, or the Brain Injury Association of America. Most nonprofits are run by a handful of people, so be patient when reaching out. Don’t forget to take your time: raising awareness can start with something as simple as explaining your story to a listening ear.

Listen to “Making Headway” on Apple Podcasts, or wherever you get your podcasts. To learn more, visit www.makingheadwaypodcast.com.

Ian Hebeisen graduated from Saint Mary’s University in May 2020, earning a degree in Literature with a Writing Emphasis. Now living in the Twin Cities, Ian writes comics, graphic novels, and poetry. In his spare time, he enjoys playing board games with his family.